Here You Will Find Information About Dante Alighieri

DANTE, Alighieri, famous poet, born in Florence, Italy, May 14, 1265; died at Ravenna, Sept. 14, 1321. He descended from an ancient family of the lower nobility, was educated under the learned Brunetto Latini, and became familiar with the sciences of his age and with the writings of many famous poets, includingHorace, Virgil, Statius, and Ovid.

At Bologna and Padua Dante studied philosophy, in which he excelled, and later pursued a course in theology at Paris. He met Beatrice Portinari, the daughter of a rich citizen, when she was only eight years old. The impression made upon him and the love he bore for her were a poetic inspiration ever afterward. She married Simone de Bardi, a nobleman, but died young, in 1290. Dante married Gemma, of the powerful house of Donati, some time after the death of Beatrice.

Dante took an active part in the politics and military activities of the Republic of Florence, engaging in the battle with the Arentines in 1289, and was present at the capture of Ceprona in 1290. When the factional divisions of the Guelphs (known as the Neri) and Ghibellines (known as the Bianchi) agitated Florence, he sided with the latter in opposition to the Guelphs, who were strong adherents of the Pope. Dante was sent to Rome on an important embassy to the Pope, and became at enmity with Boniface because that divine actively favored the Neri (the "Blacks", a political faction in Florence") as against the Bianchi (the "Whites", the opposing political faction). Dante's absence from Florence gave his enemies an opportunity to secure a decree of banishment against him and Dante remained in exile to the end of his life.

While in exile Dante traveled extensively, visiting many European cities of note, but after 1320 he remained mostly with his friend Guido da Polenta, in Ravenna. His death occurred at that city, where his bones are still preserved.

Dante's first work, "Vita Nuova," (Italian for "New Life") appeared in 1300. It is a poetic collection hearing on his youthful love for Beatrice. His fame rests on his immortal production, "The Divine Comedy" of which the Inferno is a part.

The republic of Florence set apart a sum of money at the suggestion of Boccaccio about fifty-two years after the death of Dante. This was expended for lectures in which "The Divine Comedy" was explained to the people in one of the churches, the first lecturer being Boccaccio, and later several other cities followed the same course.

The Divine Comedy was instrumental in making the Italian language one of beauty, instead of remaining unformed and rude. It has been translated into many languages, the number being estimated at fully three hundred. Dante was spoken of by Boccaccio as a man of medium stature, stooping form, slow in gait and speech, and silent and reserved, but dignified and eloquent when he spoke. Music and painting were objects of his study and devotion.

The whole has been magnificently illustrated by the great painter Dore.


"The Divine Comedy" was written largely while Dante was in exile. It has three parts, entitled Hell (Inferno), Purgatory, and Paradise. The dreams of the poet carry Dante into a dusky forest, where he is met by the shade of Virgil, who offers to conduct him through Hell and Purgatory. Virgil may not proceed further, but Beatrice shall lead him through the beauties of Paradise.

In the superb imaginative power the journey through Hell is described, and the characters of guilt and punishment are laid before us with a clearness and earnestness that impress one with awe. Dante ascends with Virgil to Purgatory and beholds similar scenes, though punishment is but temporary. Virgil now leaves himthat he may be taken by Beatrice and led to places of surpassing magnificence. Ascendingwith her into the celestial Paradise, passing over seven spheres, Dante reaches the eighth, where the triumphant Redeemer is surrounded by a glorious company. 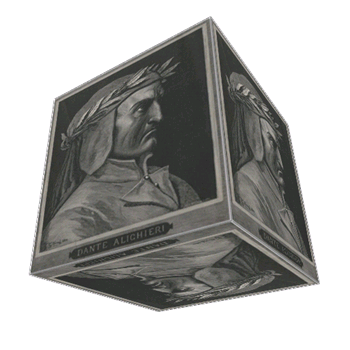 Dante feels himself in the sense of divine essence when reaching the ninth sphere and in the tenth the Deity himself is sitting, but Dante cannot see Him for excess of radiant light.